If you grew up in the US in the nineties, you probably saw Sailor Moon at some point. Take a look at this trailer for a live action fan film based on the series, and then join me after the jump for the full installment.

Sailor Moon is the story of Usagi (Serena in the English version,) a rather ditzy schoolgirl who encounters a talking cat named Luna and gradually discovers her true identity. It was created in the nineties as a manga (comic book) series by Naoko Takeuchi, and was almost immediately turned into an anime (animated series) that spanned five major story arcs. A translated version was imported into the US soon after and, in a pattern that should be familiar to Republibot readers, gained a following that included young men. 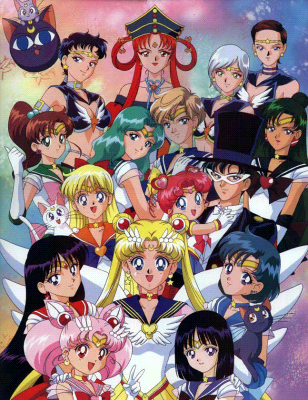 Sailor Moon The Movie is a fan imagining of an Americanized live action version (a Japanese live action series ran several years ago.) While this adaptation is recognizeable to fans of the anime, it's very much its own creature. The story loosely follows the original, but a lot has been changed or moved about. The American setting means that the schoolgirls don't wear sailor-style uniforms, for example. Conversely, some changes call back the original Japanese version, such as our protagonist's name ("Bunny" is an almost literal translation of the Japanese name "Usagi.") You can see the full production below.

The changes are largely good ones. Bunny's ditziness is toned down quite a bit, and they don't try to recreate the stylized posing of Sailor Moon as she unleashes her powers. I was wondering if the effects were too minimal; if you haven't seen the original series it's not clear exactly what she's doing when she dispatches the monster. I ultimately decided that those details aren't important for this story.

The acting is mostly good, with Avery Danielle providing a believable Bunny. The soundtrack is a real strength here, with contributions by multiple artists. The costumes are also very good. The cinematography and lighting is very uneven, which is a common problem with fan productions. Unfortunately, it's at its worst during the encounter scene, and actually undermines the creature makeup.

Although presented as the first episode in a season, they haven't decided if they're going to continue the story. I hope they do, as I found myself quite enjoying this slightly darker take on the Sailor Moon story and wanting to see where they would take it.