Usually fan films are based on a franchise; a TV series or a string of movies. Occasionally you'll get one based on a one-off movie or (increasingly) game. So it's somewhat surprising to find multiple films based on a single short story. Joine me after the jump and we'll look at four movies based on Terry Bisson's They're Made Out of Meat, which was originally published in Omni magazine back in 1990. 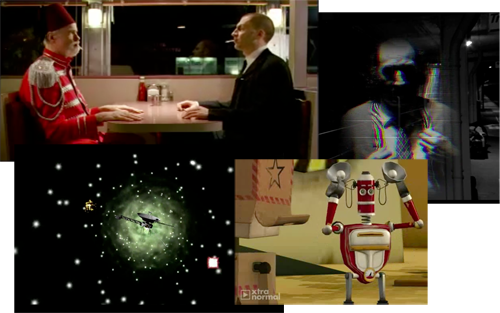 One of the challenges in adapting this story is that there are no humans, or even organic aliens, in it. Indeed, in Bisson's own stage adaptation he imagines the set without visible actors. One solution is to have the story take place with the machine intelligences disguised as humans.

The two aliens hold their conversation in a diner, with the newer one in a much less perfect disguise than the one reporting the findings. We're cleverly brought along for his increasing realization and discomfort about what he's hearing. The humans they're amongst become increasingly inscruitable, and their "meat" becomes increasingly offensive to him.

This adaptation was produced in 2005 by Stephen O'Regan at the New York Film Academy for his final film project. I hope he got a good grade, because it went on to win the Grand Prize at the Seattle Science Fiction Museum's 2006 film festival.

In 2010 Trevor Scott﻿ and Jeff Frumess adapted the story for their own film. Like the 2005 version, this one stages the story with actors playing the aliens disguised as humans. Additionally, the story is framed by a literally tinfoil-hatted begar who presumably is how the story is "known" to us.

The fourth character is a bit of a redshirt. It gets the "meat" thing across in a much more literal way but I don't think it works quite as well as the way the 2005 version handled visualizing the same concept. On the plus side, they did include the very last bit of the conversation, which highlights that they understand the enormity of what they're doing.

The third version is one that I almost passed over. It was created a year and a half ago using the Xtranormal website, which allows you to use a script and selected characters and sets to create a completely computer generated video. The results are somewhat robotic, but that works quite well here given the subject.

Finally, we have a version which follows Bisson's stage adaptation very, perhaps too, closely.

It's interesting that some of the departures from the other versions, which are clearly independently done, show up here as well. It's subtle, the extra "too" and the switching of "Nope" with "No." It's also curious that both this version and the previous one cast the newer, higher ranking, alien as female and the older one as male, while the two that use live actors cast them both as male.