Rarity becomes the belle of Canterlot society. Will she forget her friends? 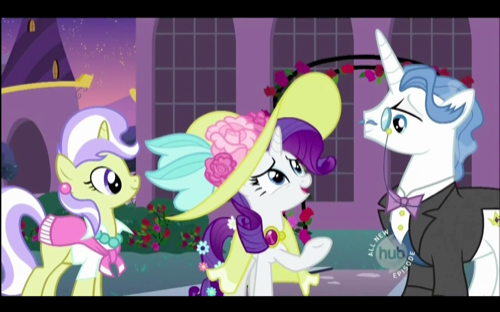 Recap: Rarity is escorted into a suite by the Princess herself. Twilight had asked that she might be given accomodations while she visited Canterlot, and now she's staying at the castle proper. She is effusively grateful, to the point of some discomfort by the Princess.

As she and her cat, Opal, sit at a cafe Rarity decides that to repay Twilight for her digs she'll make her a gown for her upcoming birthday party. A pair of demi monde ponies, Jet Set and Upper Crust, come up to her and ask about the hat she's wearing. Before she can say anything, a pony named Hayseed Turniptruck comes up and reminds Rarity that they met at a recent ho-down in Ponyville. Hearing that, Jet Set and Upper Crust decide that Rarity's hat is merely common and walk off with their noses in the air. Rarity takes offense and decides to make Twilight's dress something extravagant.

Returning from a shopping expedition for materials, Rarity literally bumps into another hoighty pony, Fancypants. Initially miffed, he's impressed when he finds that she knows the Princess and is staying at her castle. He invites her to see the Wonderbolt's Derby from his VIP box. Rarity is torn between attending and working on Twilight's dress. She decides she can do both and ends up going. While there, she makes an accurate prediction of the winner. When asked how she knew, she mentions Rainbow Dash. Asked about Dash, she claims that she's the Wonderbolt's trainer. The ponies are further impressed, and Fancypants declares her his "favorite party guest."

Afterwards, Rarity is besieged by the other guests to attend various functions. While Twilight's dress is still a priority, she's convinced she can manage it all. We get a musical montoge of her at the various functions, ending with her falling asleep next to Twi's incomplete dress.

The next day, she's about to rush home to finish the dress when a letter arrives. Jet Set and Upper Crust have invited her to the Canterlot Garden Party, an event second in prestige only to the Princess' Grand Galloping Gala. Unfortunately, it's the same time as Twilight's party in Ponyville. After brief consideration, she decides it's too important to pass up. She writes a letter to Twilight, inventing an illness for her cat, Opal, as an excuse.

The following day, Rarity is dressed up and about to head out to the Garden Party when the rest of the Mane Six show up at her door. When she heard Rarity couldn't make her party, Twilight moved it to Canterlot. She even got the Princess to let them use the ballroom. Fluttershy asks after Opal, and Rarity quickly dunks her in the shower to simulate illness. Twilight asks if the incomplete dress is hers, and Rarity reluctantly admits it is. Twi declares the simple outfit perfect for her party.

At the castle, the Garden Party is taking place just outside from the ballroom. Rarity covertly splits her time between the two parties, but it becomes increasingly taxing until she abset-mindedly brings a croquette mallet to the girl's party. Twilight is surprised at Rarity, who starts to appologize until she realizes Twi is surprised at her business savvy, remarking that the Garden Party is a great place for her to drum up business. Rarity is relieved until her friends decide to just move their party over to the garden.

The fit is an awkward one. Applejack doesn't understand why no one is gardening and Pinkie's table manners haven't changed. Fancypants takes note of Twi's dress, and asks her where she got it. Twi proudly announces that Rarity made it, to the shock of the crowd. When asked if she knows these ponies, Rarity declares that they're her best friends and the most 'important' ponies she knows. Jet Set and Upper Crust laugh at that, but Fancypants decides that they're "charmingly rustic." He goes on to praise Twi's dress, and Rarity is immediately swamped with orders. He then asks to be introduced to her friends.

Later, Rarity starts writing a letter to the Princess, but when Celestia shows up Rarity just tells her the lesson she learned about not forgetting your home or your friends. 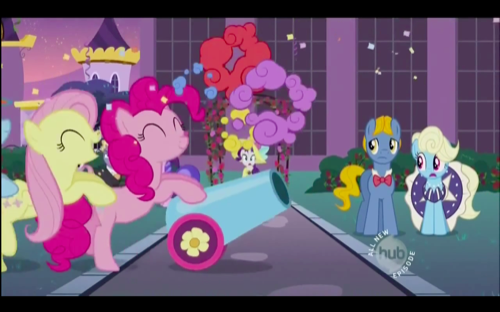 Review: Poor Rarity, she just can't seem to maintain being the embodiment of generosity for any legnth of time. Still, as long as she provides fodder for fun episodes I'm OK with that.

I mostly liked the writing on this one. The way Rarity goes off course gradually, convincing herself that she's capable of attending three social functions and still finishing Twilight's dress on time felt very real. The one mis-step in the script was Rarity passing off Rainbow Dash as the Wonderbolt's trainer. Why didn't they fire that Checkovian gun after they showed it? Admittedly, I was somewhat relieved that they didn't, since Dash could have suffered from the blowback on that as well. They were obviously trying to show us that Rarity was ashamed of her roots and her friends, but they could have done so without setting up something that would have to be resolved--Fancypants does get introduced to Dash--and leaving that resolution off-screen.

The musical tour of Canterlot society was a lot of fun. Fluttershy's song in May the Best Pet Win lacked a chorus to give it that "hook," but Daniel Ingram more than made up for that here. The montoge was opportunity for a lot of call-backs to the fashionable ponies that Rarity has interacted with before. Photo Finish, Hoity Toity, Sapphire Shores, and even Prince Blueblood had cameos.

We also get the usual shout-outs. Twi's dancing is reminiscent of Elaine's on Seinfeld, and Hayseed Turniptruck bears more than a passing resemblence to Mater from Cars. There's a couple paintings in the gallery Rarity attends during her song montage that are variants of Picasso's and Dali's work. The blimp that she christians resembles the Windfish from The Legend of Zelda.

The animation continues to be first-rate, and they did some interesting things with charachter design. Both the lower class and upper class ponies that were introduced were usually off-model, especially Fancypants' companion (whose preening is worth a re-watch on its own.) 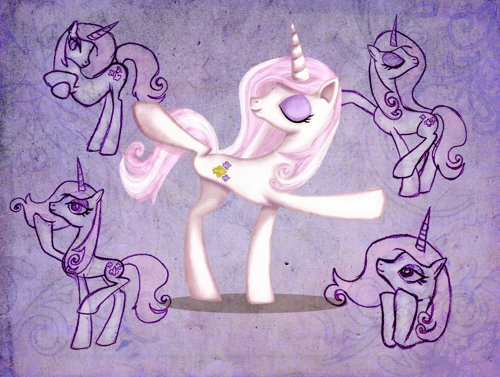 Brony Notes: Derpy appears towards the lower left in the mosaic of ponies shown during Rarity's song at about the ten minute mark. Octavia, the popular cello player, got a prominent spot at the begining of the Garden Party.

This one proved popular with the fans. Fancypants was well particularly well recieved, probably because of his unexpected Good Guy Greg attitude.

The artists are having a field day with the "hipster" get-up Rarity wore when attending the art gallery and "Fleur," the fan name for Fancypants' companion. DeviantArtist WhiteEyedCat did the study of Fleur's poses above.

A new song means new remixes are on the way, but some of the best stuff to come out of this fandom are original songs. The one below, Let Your Mane Hang Down by d.notive, is based on the *Sisterhooves Social episode.