It's Cider Season, and you know what that means! It's time for a lesson in economics! 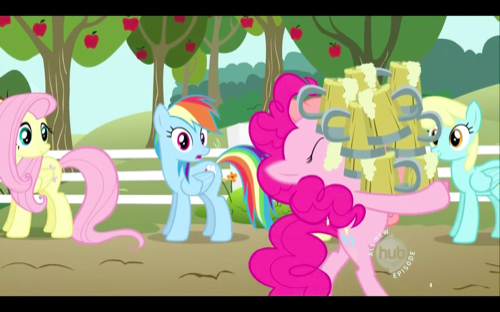 Recap: Fluttershy is awakened while it is still dark by Rainbow Dash, who is eager to be early in line for the start of Cider Season. Dash is perpetually beaten in line by Pinkie Pie and never manages to get to the front before the cider runs out. When they arrive, however, they find that Pinkie and "a few others" have camped out overnight, putting Dash at the end of a very long line.

When the Apples run out of that day's cider, some ponies complain that they always run out. Applejack assures them that they keep increasing production, but have to put quality first. Just then, a large contraption drives up to their stand. The Flim Flam brothers introduce themselves and their vehicle, the Super Speedy Cider Squeezy 6000. The Squeezy 6000—powered by the brothers' unicorn magic—picks, sorts, and presses apples, and they promise enough throughput to keep the whole town in cider. They offer their services to the Apple family for a mere 75% of the profits. The Apples refuse, since the profits from cider keep their farm afloat through the winter months.

The next day, the Apples again run out of cider (to Dash's chagrin) and the Flim Flam brothers return. They goad the Apples into a contest to produce enough cider for the entire town, with the winner getting sole cider distribution rights for Ponyville.

Mayor Mare kicks off the competition the following morning. The Flim Flam brothers take an early lead, with their machine outproducing the Apples three barrels to one. The rest of the Mane Six pitch in to help the Apples, and manage to get production up enough to pass the brothers, five to three. Flim and Flam are worried for the first time, and turn up the power on the Squeezy 6000. This results in entire trees being sucked into the works, which causes all the apples to fail quality control. Flim solves the problem by turning off that particular function. Dash wants to shortcut their own quality control to keep up, but Applejack refuses.

At the end of the contest Flim and Flam have handily bested the Apples, who are tearfully resigned to losing their farm. But when the citizens of Ponyville get a taste of the brothers' cider, they declare it drek and refuse to pay for it. The brothers decide to clear out for the next town, and the farm is saved. As a bonus, the competition has left the Apples with enough cider for the whole town.

Applejack sends a letter to Celestia, in which she declares that she has learned... nothing! She was right all along! 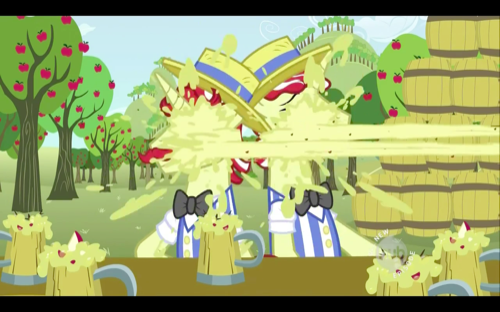 Review: That was easily the best letter to the princess yet. Aside from the flippant tone, it shows that Applejack learned her lesson from Applebuck Season way back in season one. This show isn't intended to have much continuity, so it's nice to see it when it happens.

Despite this being intended as an Applejack episode, Dash nearly steals the show. The animators had fun with her increasing frustration, using a couple of callbacks in her facial expressions. The only reason she doesn't run away with it completely is because of Flim and Flam, who are just too fun. They're straight out of The Music Man, complete with their own version of Ya Got Trouble.

The economics of Equestria are interesting. There's definitely an essentially capitalist system at work. The need to assure quality is pretty much the point of this episode, which should probably be shown in a lot of boardrooms. We get to see the benefits of competition, as it's the only way the Apples could be incentivized to produce enough cider for the whole town in one day (actually, in one hour.) Worryingly, though, it appears that merchants there too prefer monopolies. I have to wonder if the Apples will manage to maintain that level of production now that they have the sole rights to cider distribution in Ponyville.

I'm amused that, even in Ponyville, people will camp out to be first in line for quality Apple (family) products. After seeing the Zap Apples in Family Appreciation Day, I'm pretty sure that was intentional.

Brony Notes: Derpy is back in the background, showing up a bunch of times during the Flim Flam brothers' song. Since she joined in on the chorus, this technically counts as a speaking part for her.

A lot of the foreign fans were confused by this episode, since "cider" usually refers to the alcoholic variety outside of North America. Admittedly, the animators played with that ambiguity a bit in giving the cider a frothy head.

The Flim Flam brothers were well received, as evidenced by the "JibJab" style logo created by deviantArtist Snapai, above. Indeed, there was some sympathy for them, since—appearances to the contrary—they weren't con men so much as bad businessmen. A lot of the discussion of this episode revolved around the economics involved, and many fans pointed out that with a more equitable cut of the profits everyone would have benefited.

The Music Man reference went over quite well, although some fans thought it was a reference to the Monorail song from The Simpsons. The trick is, the latter song is now better known than the original, so it's not clear it wasn't. YouTube's churrocam ran with that interpretation, below.