Our little Spike is growing up! Oh, wait. He's a dragon... 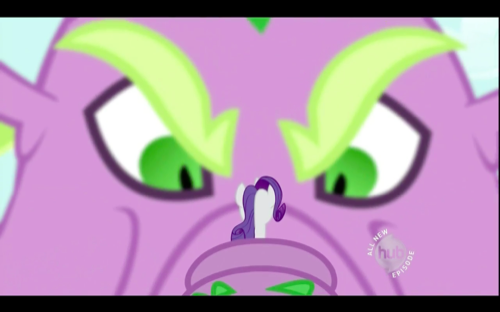 Recap: Today is reshelving day (which is apparently like spa day for Twilight) and she's in the midst of her re/organization when Spike distracts her. He's fawning over the fire ruby he's saving for his Birthday.

Rarity arrives, looking for a book on historical fashion to help get ahead of the curve on a resurgence of capes, and is captivated by Spike's gem. Spike is somewhat torn (fire rubies being quite tasty to dragons) but decides she should have it. He's rewarded with a kiss, and he vows never to wash that cheek again.

A dragon of his word, Twilight is still trying to get him to clean his face a week later as she prepares for his birthday party. It's a standoff, with Spike running away as fast as Twilight can teleport him back. Pinky manages to arrive in one of the teleports, which throws Spike off enough for Twilight to give his cheek a good wipe-down.

The rest of the Mane Six arrive, and Spike is surprised at the presents he gets. This is his first birthday since moving to Ponyville, and previously he'd only get one present from Twilight (a book.) Pinky tells him that Mr. and Mrs. Cake baked him a surprise and he rushes off to collect it.

At Sugarcube Corner the Cakes present him with a sapphire cupcake. He's admiring it on the way back when he collides with Cheerilee. He mentions that its his birthday and she rummages through her sack of groceries until she finds a fedora for him. Realizing the implications of this, Spike mentions his birthday to Lickety Split, who then gives him the ball he was playing with. However, when Junebug merely wishes him a "Happy Birthday" he asks her for the flowers she's carrying. Twilight arrives and apologizes for his behavior. Spike seems contrite and says he's going to give Cheerilee her hat back, but is unrepentant when she leaves.

The next morning Twilight discovers a horde of objects at the foot of her bed, and at the center of it a much taller, ganglier Spike. Concerned about him, Twi takes Spike to a doctor, and then a vet, before finally consulting Zecora. She tells Twilight that a dragon's greed and size feed each other in a vicious cycle. In the meantime, Spike has ransacked Zecora's hut and fled.

Twilight rushes back to Ponyville and finds Spike trying to wrest Scootaloo's scooter away from her. She distracts him by waving an ordinary broom in front of him, which he chases all the way back to their home. She tries to lock him in a room, but he just exits through the wall.

Applejack is wondering who stole the apples and leaves off of her trees, when Twilight asks her for help in stoping Spike's rampage. AJ laughs at the thought of the little guy gone wild, until Spike runs by with an armful of her produce. She and Twilight try to rope him, but only manage to get themselves tied to a tree.

Rainbow Dash answers their cry for help and they rush off to the sound of Fluttershy's scream. They find her up in a tree. Spike had stolen her chicken coop to hold the rest of his growing horde. Another scream leads them to Sugarcube Corner, where Pinky is trying to fend off Spike by assaulting him with cakes. Spike adds them to his horde and, in another growth spurt, grows larger than the bakery.

Rarity is trying out her new cape when Spike collects her, King Kong style. He then steals the watertower to use as a bigger container for his stash. Dash and Fluttershy rush to Rarity's aid, only to get swatted out of the sky when they are tangled in her cape.

The Wonderbolts arrive, and manage to shave off a few of Spike's scales as they buzz hin. He climbs the dragon's mountain (vacant since season one) and, after stashing his cache, manages to trap them in the watertower. Rarity, unaware that the monster holding her is Spike, berates the dragon for his rampage and especially for ruining her cape, which she brandishes at him. Spike's eye is caught by the fire ruby she is still wearing. Noticing this, she says he can't have it since it was given to her by "my dear friend Spikey-Wikey, the kindest, sweetest, most generous dragon ever." Spike flashes back to his gift of the gem to her and snaps back to his original form. Unfortunately, they're at the height of his formerly towering body and they begin to fall. As they plummet Spike starts to tell Rarity of his crush on her, but she shuts him up with a hoof to his lips and just smiles at him, tears brimming in her eyes.

Dash and Fluttershy manage to catch them in the remains of Rarity's cape, and lower them gently to the ground. Spike is abashed at the damage he's done, and is confused when Rarity tells him she's proud of him. She explains that "it was you who stopped... well, you from destroying Ponyville" and rewards him with another kiss. Spike pens his own letter to Princess Celestia, and it's revealed that Spike has literally framed Rarity's last kiss. 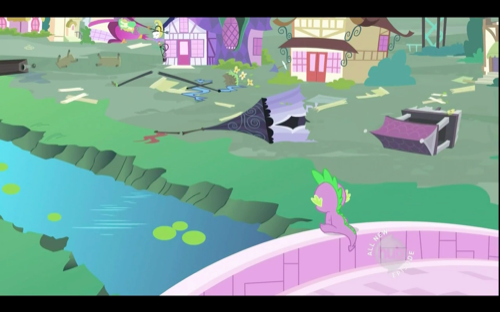 Review: This is a nearly perfect MLP episode. All it is lacking is a song.

Greed is bad, mmkay? It's an ancient chestnut and it's been done a million times, but rarely this well. Dragons being the literal embodiment of the cycle of wealth and avarice was just brilliant. You could use an MLP dragon as a metaphor for so many things that I'll just leave that as an exercise for the reader.

(In-world there's the somewhat darker question of Spike's ultimate fate. Is greed solely responsible for the biological maturation of a dragon? If so, Spike is facing eternal immaturity. If not, will his natural growth ultimately reawaken the monster within? Probably just as well this is unlikely to be explored. On the plus side, the episode had the perfect excuse for the "reset button" that non-episodic shows use.)

I'm not even going to try to list all the callbacks to earlier episodes. Spike's initial horde alone must have included items from a half dozen of them. Interestingly, Fluttershy's fear of adult dragons is referenced, but appears to have subsided since her star turn in Dragonshy.

The animation continues to be fantastic. You know Rarity is happy when she starts hopping like Pinky Pie, and Spikezilla making the 'talky talky' hand gesture as Rarity takes him to task is a nicely subtle touch. This is important because the animation reinforces the writing, which in turn trusts the animators. Some dramas won't trust their actors the way the writers did here when they just let Rarity and Spike trade looks silently.

The production team continues to find gold in unexpected places. Take the capes in this episode. I wouldn't be surprised if Studio B had a note from Hasbro saying they wanted to encourage more fashion play. And yet that single idea seamlessly (sorry) brought Rarity into contact with the fire ruby, ended up hindering her rescue by her friends, which instigated her berating Spikezilla, which produced the reveal of the fire ruby, provided for their rescue from the fall, and illustrated the lesson of the week. Fashion in a girls cartoon should send me to the vomitorium (the exit, of course) and yet the fashion episodes are among the strongest in MLP. 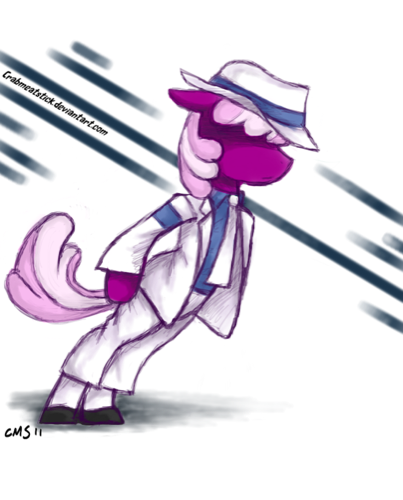 Fan reaction has been overwhelmingly positive. This is already a favorite episode for many. New characters are fodder for the creative mills, and we got Junebug and Lickety Split as well as the unnamed doctor and veterinarian. The leading fan name for the Doctor is Muffin Top, for his unusual mane. The vet is still up in the air (I'm pulling for Vetinari, but that's a long shot.)

Oddly, the thing a lot of artists siezed on was Cheerilee's hat. A lot of them saw a Michael Jackson connection, resulting in works like the above by deviantArtist Crabmeatstick.

We didn't get a song this episode, but Becoming Popular from last week is still going strong. Composer Daniel Ingram has been encouraging fans to cover it, so there are a bunch of versions out there. One of the more unusual is the rap remix below, by Mic the Microphone.

Next week we should see another song, and it looks like we'll finally see the train that was inserted into the opening title sequence this season. After that we'll have a bit of a break for the holidays.