A stunt goes awry and lands Rainbow Dash in the hospital for a few days. How will the athletic pony keep from going stir-crazy? 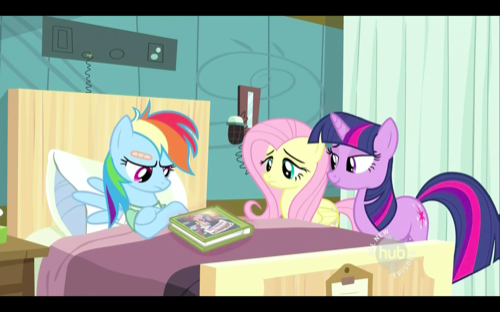 Recap: Pinkie Pie, Rarity, and Twilight are watching (a mostly off screen) Rainbow Dash practicing her stunts. They're dazzled by her performance, until she crashes into the ground.

Rainbow Dash wakes up in the hopsital, surrounded by her friends. The doctor informs her that she has to stay in bed for a few days, which distresses the athletic pony. Her friends try to cheer her up, and Twilight snags her a copy of Daring Do and the Quest for the Saphire Stone from the hospital's book cart. Dash balks at the book, declaring that, while reading is fine for eggheads like Twilight, it is "unquestionably, undeniably uncool." As visiting hours end, Twilight tells Dash that she'd should give the book a try since the protagonist is a lot like her.

Dash makes some feeble attempts to entertain herself, but the boredom gets to her and she finally starts reading the book. Daring Do, it turns out, begins her story with an injured wing, which Dash readily identifies with. Do is an Indiana Jones style adventurer exploring a vaguely South American type of jungle. She escapes ambush by a pack of (mostly) large cats by swinging over a chasm, which coincidentally places her right before the temple she was searching for. Dash finds that she's enjoying the story, but is horrified at the thought that she's an egghead too. She continues reading, interupted by visits from her friends. Dash hides her book from them and uses ruses to get them to leave so she can continue the story.

Daring Do manages to steal an statue at the heart of the temple, but removing it activates a trap that floods the room with lava. She escapes through a hole in the ceiling and is blown clear when the temple erupts. She's then captured by a strange creature named Ahuizotl. He places her in the mother of all death traps, tied to a slab in the middle of a room which is filling up with snakes, spiders, and quicksand while the spiked walls are closing in.

And then Dash is discharged. Despite her protests, she is declared fit to leave and unceremoniously dumped outside the hospital.

Desparate to find out what happend, but unable to bring herself to ask Twilight for a copy of the book, Dash decides to do a little breaking and entering and reading. She sneaks into the hospital at night and finds the book in her old room. The current patient thinks she's a thief, and Dash has to escape from the hospital and its staff. They continue to chase her through town, and catch up to her at Twilight's place. Dash has to confess that she was just trying to finish the book. Twi tells her that she could borrow hers, since she has the entire series. Dash admits that she shouldn't have knocked something that she hadn't tried, and Twilight tells her that would make a great letter to the Princess. Dash agrees and has Spike write the letter while she finishes the book.

Daring Do manages to use her hat to escape the death trap, and makes off with the statue. Rainbow Dash declares this 'awesome' while she launches into the next book. 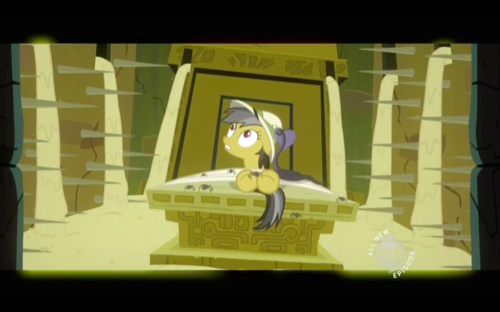 Review: Now that was a well done episode. Really, the only thing it lacked was a Daniel Ingram song. For people inclined towards action/adventure flicks, it would make a very good intro to the series.

The writer was Cindy Morrow, who's also credited with Winter Wrap-Up and Sisterhooves Social, among others. Both were fan favorites, but I have to say this was the best written of the bunch. The story within the story was well done, and I especially like the way that Dash incorporated some of what she learned from the book into her escape from the hospital (albeit sometimes unneccesarily.) It was a subtle reinforcement of the larger theme. I'd bet my pith helmet that the working title of this episode was Reading Rainbow.

The writers also managed to work in a lot of references. The Indiana Jones ones were the most obvious, although they were subverted as often as not. While Daring Do never has to go back for her hat, you can be sure she would since it's much more useful than Indy's ever was. There were plenty of others that weren't as obvious. Bored Dash bouncing the ball against the wall was out of the The Great Escape. The books' titles were references to the Harry Potter series. The first volume was alternately called Quest for the Emerald Stone and Quest for the Emerald Statue (Harry Potter and the Sorcerer's Stone was called Harry Potter and the Philosopher's Stone in the US.)

The animation was fantastic, as always. I forget to mention that as often as I should, because it's so consistently good. There's too many to list, but I'll point out Dash's midnight creeping and her little leg kicks as she hugs her book at the end as examples.

One of my favorite bits was the pussy cat (last seen in May the Best Pet Win) who was part of the collection of jungle cats that Daring had to deal with twice. What seemed like a throwaway joke was justified when we saw the cat take its place, Blofeld style, on Ahuizotl.

Ahuizotl was an interesting character. He's based on an Aztec mythological creature) of the same name, that would ambush prey with its hand-tail. That gave me pause, so I checked another Hasbro-owned property. Sure enough, the Ahuizotl are listed in the Dungeons and Dragons Fiend Folio. I doubt that this is intentional on Hasbro's part. It seems more likely that it's either coincidental, or an in-joke on the writers' part. Still, I am greatly amused that this cartoon for little girls is providing them with a grounding in the D&D bestiary. 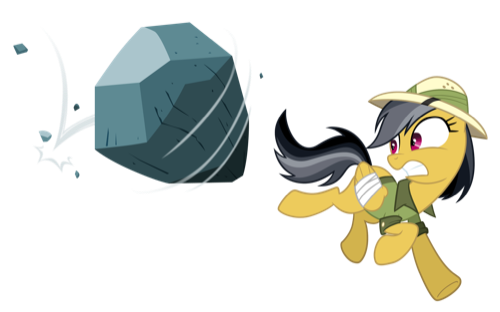 Brony Notes: Derpy was AWOL again this week, which is just as well since she had a very busy week in the fandom.

Early in the week, The Last Roundup, which featured Derpy's speaking appearance, was pulled from iTunes. At about the same time, MightyFine, who hold an apparel license for the show, took Derpy's name down from their site (although the shirts remained.) Fans were confused and feared that it was a Politically Correct move in response to a few complaints that Derpy's characterization was making fun of the mentally handicapped. There followed a storm of letters and pettitions to Hasbro to restore Derpy. Some fans were encouraging others to buy Derpy shirts from MightyFine to show support.

A few days ago, the episode showed up on The Hub's website and Derpy's name was restored at MightyFine's. Nobody knows what happened, but I suspect the cause might have less to do with PCness and more to do with the fact that there's a small clothing outfit called Derp Clothes, and trademark concerns were raised. Curiously, the episode remains missing from iTunes.

By Saturday everyone had largely settled down. Fan response to this episode is overwhelmingly positive. Daring Do's image was already known due to an exclusive preview clip that showed up a couple days prior, so fan art like the above from deviantArtist Equestria Prevails was already circulating (sharp eyed viewers may recognize "Tom" from The Return of Harmony, Part 2.) Dash in her almost-stealthy cat suit was another favorite of the artists. And I'm far from the only one to make the Reading Rainbow connection, as the below mash-up by YouTuber HareDoctor proves.

[Note: As I was getting ready to post this, I came across this piece by one of the storyboard artists on the show that seems to confirm that Reading Rainbow was a working title for this episode.]