Fluttershy is tired of being a doormat, so she attends an assertiveness seminar given by a Minotaur. This should be interesting. 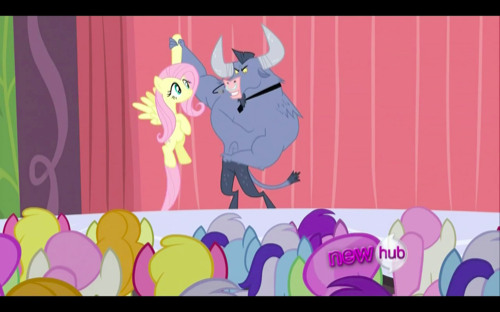 Recap: It's feeding time at Fluttershy's cottage and the animals are getting unruly. Her bunny Angel is proving to be particularly picky, refusing pellets or a salad. He shows Fluttershy a cookbook with an elaborate salad complete with whipped cream and a cherry on top. When she balks he smacks her and shoves the book in her face. She meekly agrees to make the salad.

Later, Fluttershy is shopping at the market, but is constantly cut ahead of by other ponies. Rarity and Pinkie Pie witness this and tell her she has got to assert herself. Rarity demonstrates using her wiles to talk a nerdy pony out of the last asparagus, and Pinkie Pie uses Bugs Bunny bargaining to get tomatoes for last week's price. Fluttershy has less success trying to use a combination of the two in an attempt to secure the very last cherry.

At home, Angel is about to dig into the special salad Fluttershy prepared when she apologizes for the lack of a cherry. He checks to book to confirm that there is indeed supposed to be a cherry on top, and then kicks the salad and Fluttershy out of the house. Landing in a pile of mail, she finds a flyer for an assertiveness seminar at the Hedge Maze Center.

At the seminar, Fluttershy is kicked to the back of the crowd. After a stirring build-up, Iron Will takes the stage. The Minotaur promises to teach them to be more assertive and guarantees satisfaction or there will be no cost for the seminar. He asks for a volunteer and despite a flurry of raised hooves his goat assistants point out Fluttershy cowering in the back. He demands that she get on stage and she reluctantly does only to find one of the goats blocking her path. This turns out to be a role-playing, and Iron Will demonstrates how she should behave by loudly berating the goat. He has her mimic him, and she manages a passable put-down. He tells he crowd that if his techniques can work for Fluttershy they can work for anyone, to cheering and applause.

Later, Fluttershy confronts the gardener who is over-watering her petunias. When he dismisses her complaint, she kinks his hose and then releases the built-up water all over him. He acknowledges that she may have had a point. Emboldened, she confronts two ponies blocking the bridge with garbage carts. When they dismiss her complaint she dumps the contents of their carts over them. At Sugarcube Corner a pony cuts her off in line and she tells her off so badly that the entire line moves behind her.

Pinkie Pie and Rarity are impressed with "New Fluttershy." Pinkie declares that she's pleased as punch, and then produces a bowl of punch. When she laughs at her own joke, Fluttershy takes offense and upends the punch on her.

She then goes on a mini-rampage, taking great offense at minor matters. When Pinkie and Rarity try to tell her she's taken assertiveness too far, she accuses them of just wanting "New Fluttershy" to be a doormat like "Old Fluttershy." She then insults them and belittles their occupations until they take off with tears in their eyes. She catches sight of herself in a puddle, and desides that she has become a monster.

Ashamed, she retreats to her cottage. Pinkie and Rarity come by to try to convince her that she's simply taken assertiveness too far, but she doesn't trust herself. Iron Will comes by to collect payment for the seminar, and to Pinkie and Rarity's surprise Fluttershy calmly, but firmly, tells him that she was not satisfied with the lessons and therefore she refuses to pay him. Iron Will is quite surprised at this—no one has ever told him they were unsatisfied before—but he ultimately accepts it and decides to incorporate Fluttershy's "no means no" into future seminars.

Fluttershy appologizes to her friends and composes a letter to the Princess, stating that she's learned to put her hoof down without being unpleasent or mean. 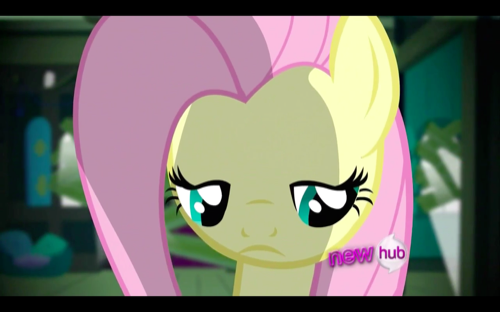 Review: Whoa. Angel has always been a bit of a pain, but straight up bitch-slapping Fluttershy? That struck me as not so much a comedic slap as domestic abuse. Merriweather Williams wrote this one, and she's shown a bit of tone-deafness in this show before.

The rest of the episode was pretty great. Iron Will is a hoot, and it was nice to see him turn out to be a fairly decent guy after all his bluster. The writers and animators like to work references into the show, and he was an amalgamam of at least half a dozen all by himself, including Mr. T, Randy Savage, and Johnny Bravo. Despite that, he worked very well as a complete character in his own right.

"New Fluttershy" was actually a combination of a couple old Fluttershys: "Psychoshy" from The Greatest Night Ever and "Flutterbitch" from The Return of Harmony. The writers really like to have the Mane Six go over the edge, and Fluttershy in particular is fun to see it happen to.

Pinkie and Rarity have apparently bonded since the end of The Last Roundup. I really like the dynamics between the various characters, and this episode showed (in a back-handed way) why Pinkie and Rarity get along at all.

The animation continues to be excellent. The rack focus inside Fluttershy's cabin and Pinkie's "Fashion is her passion" shimmy were particularly noteable. Likewise, the background music was well done, lifting cues from Rocky (for Iron Will's introduction) and The Incredible Hulk TV series (for Fluttershy's retreat to her cottage.)

Brony Notes: Derpy appears a couple times, once in the crowd at Iron Will's seminar and once at the market failing to get asparagus.

The background artists are certainly paying attention to the fandom. At the market, Derpy's saddlebag's clasp is in the shape of a muffin. Similarly, the background ponies dubbed "Lyra" and "Bon Bon" are paired together with Bon Bon having a clasp in the shape of Lyra's cutie mark.

Fan reaction to this episode was largely positive. Angel certainly lost fans over his treatment of Fluttershy, but Iron Will was a big hit. There was some sentiment that Fluttershy didn't appologize adequetly to Pinkie and Rarity, but that appears to be a minority opinion.

Iron Will was obvious fodder for the artists, but my favorite bit to come out of this episode was deviantArtist from-yesterday-xx's observation (above) that one of the ponies that was rude to Fluttershy was a recolor of Rainbow Dash.

Next week we're getting another Twilight Sparkle episode, which has been considered overdue by many fans.