I'm playing catch-up on the pony reviews, so let's jump right in and look at this season's Cutie Mark Crusaders episode. 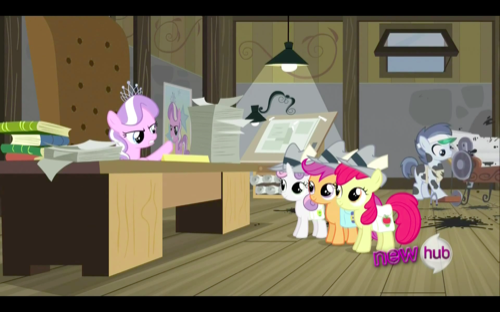 Recap: Acting on a comment by Applebloom, Sweetie Belle and Scootaloo try a variety of paper-related activities to gain their cutie marks but get nowhere. They confront Applebloom who tells them she meant they should try writing for the school paper.

They stay after class and join the paper, The Foal Free Press. The paper has a new editor, Diamond Tiara, who insists on juicy stories. The Crusaders get several stories that are rejected, but then happen upon Snips and Snails, who have somehow managed to get entangled in chewing gum. Their article on the incident, written under the pen name "Gabby Gums," is a big hit. Tiara assigns them a gossip column, but the girls are having trouble finding anything else to write about.

Rarity finds the Foal Free Press in Sweetie's saddlebag and is delighted by the Gabby Gums article. When she asks to borrow it so she can show her friends, Sweetie Belle realizes they should expand their coverage to the whole town. They start writing articles on everyone from the Cake twins to Celestia, and interest in the paper grows.

Rainbow Dash finds the rest of the Mane Six at the spa discussing the column. Twilight is worried that Gabby Gums doesn't respect anyone's privacy, but most of the others are fine with it. Rarity convinces Rainbow Dash to try a 'hooficure' but she finds having others touch her hooves disturbing and cuts it short. She then volunteers that she wishes Gabby would do a column on her and Spike volunteers that she's done one on him.

At the paper, Diamond Tiara cans the story on Spike for being too soft on him. The Crusaders have been having second thoughts about their stories, but decide that they have to give the ponies what they want.

At Sugarcube Corner, the Mane Six are going over Gabby Gums columns on the Apple family, Twilight, Fluttershy, and Pinkie. Rainbow Dash comes in with every copy she can find

Rarity thinks Gabby is harmless, until she learns that Gabby Gums is printing her diary. Twilight mentions that Sweetie is on the paper's staff and she might know Gabby Gums. Rarity is offended at the suggestion that her sister would associate with such a person, but once home she discovers her diary in Sweetie's bag. She confronts her about it and Sweetie Belle explains that they were desperate to get their cutie marks. Rarity convinces her that making everyone feel bad is unlikely to be her destiny.

When the Crusaders attempt to quit the paper, Diamond Tiara refuses to let them. Furthermore, she has a blackmail file on them and she threatens to publish it if they refuse to write more columns. Complicating things still further, now that their secret is out nobody wants to talk to them.

At press time, Diamond Tiara is ready to run the blackmail file when the Crusaders show up. Their story is immediately run, and only later does Tiara realize that it's not a typical Gabby Gums piece but an apology and resignation. Once all the details are public, Cheerilee deposes Diamond Tiara as Editor in Chief and installs Featherweight. Tiara learns that she still has a position available to her: pressman. 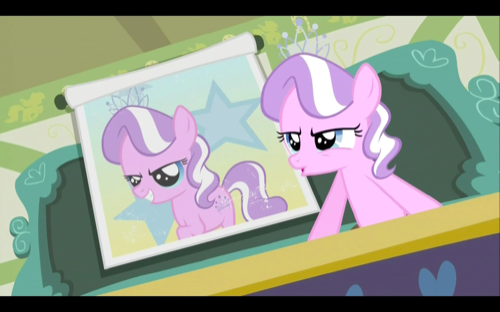 Review: I'm a fan of the Cutie Mark Crusaders, and it looks like this is the only proper one we get this season so I'm inclined to give it full marks on that alone. Fortunately we also have another quality script from M. A. Larson, who has more than his share of fan favorites, including Super Speedy Cider Squeezy 6000 and Luna Eclipsed. Oddly, though, it reminded me most of Sweet and Elite, which was penned by Meghan McCarthy. It has a similar plot resolution, in that the protagonists are spared the worst of the consequences for their actions. I like that not just because it's more realistic, but because it keeps things interesting for adults who are used to seeing the scales balance at the end of a kids' show.

That's not to say that they were spared all the consequences. Angel slamming the door in your face while Fluttershy cries waterfalls is bad enough, but when the most taciturn pony in Equestria gives you a lecture on how badly you screwed up, you done screwed up bad.

Rarity was in, er, rare form this episode. Her reaction when Gabby Gums printed an article about her was an instant classic, but it was immediately topped when she used her own snooping as an example to Sweetie of why it's wrong. That's some Mom-Jitsu right there.

One thing that did bug me was Spike. Everyone knew he was interviewed by Gabby Gums, and later that he had given "her" information. Why did nobody think to ask him who Gabby was?

The animators were on their game again. I don't think Fluttershy had any actual lines this episode, but she still managed to be heartbreaking. It takes a confident crew to use the waterfall tears that we have only seen Pinkie use and have Pinkie use them minutes before in a comical manner. We also have an entirely new character model for Featherweight, which is some welcome variety.

The layout artists were having just as much fun. The clubhouse still contains the Rainbow Dash poster and balloon sculpture from The Mysterious Mare Do Well, and Smartypants make a reappearance. Background musician William Anderson was dropping musical cues as usual, this time echoing the Simpsons theme in the opening shot of Ponyville.

Brony Notes: No Derpy this week, but Dinky—the unicorn filly with the same coloration that fans have decided is her daughter—is present throughout, noticeably as the pony DT takes the paper from at the end.

Fan reaction was mostly positive, although some would just as soon have left the fillies' Crusading days behind them. There wasn't a lot from the artists, although they may just be figuring out how to draw Featherweight's new design.

April Fools Day followed this episode, and some of the fan sites revamped their design to feature earlier generations of My Little Pony. This led to some backlash from the minority that were also fans of previous iterations.

We're coming up on the season finale, and the Hub is treating it like an actual royal wedding. Tori Spelling will be 'covering' it, and a new section of their website is devoted to it. They've even got the New York Times in on the deal. DeviantArtist azurevine got a head start with a ponysculpt of AJ in her wedding attire, above.

Speaking of royalty, check out this mashup of FiM and HBO's Game of Thrones, by YouTuber adecoy95.