I'm getting this in under the wire, but let's take a look at last week's FiM whodunit before the royal wedding tomorrow. 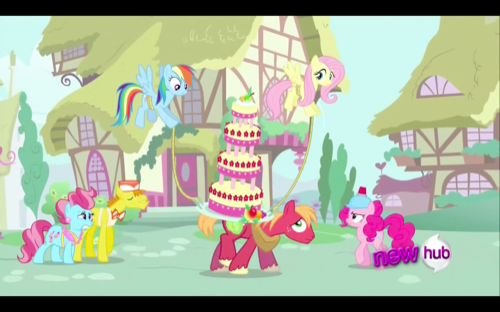 Recap: Pinkie has to transport the Cakes' entry in the National Dessert Competition in Canterlot. Big Mac is carrying it to the train, but it's heavy even for him and a series of near-disasters results in her enlisting the rest of the Mane Six to help out. When they get to the train, however, they realize they can't fit it through the door.

After the titles we find Big Mac nailing the side of the train car back on, and Pinkie introducing everyone to the Cakes' masterpiece, the "Marzipan Mascarpone Meringue Madness," or MMMMM for short. As the ponies are admiring it, they're joined by three of the other contestants and their entries: Gustave le Grande and his Exquisite Eclairs, Donut Joe and his Donutopia, and Mulia Mild with her Chocolate Mousse Moose. Pinkie is afraid the other bakers will want to sabotage MMMM, but the rest of the ponies dismiss her concerns and turn in for the night.

Pinkie stays up to guard over the cake, but grows increasingly sleepy. Just as she nods off, she's startled by a dark figure rushing past her. She gives chase down the length of the train, but gets to the end without finding anyone. She returns to the entries' car only to see a dark figure in the opposite door. She again gives chase, but ends up in the locomotive without finding anyone but the engineer. She returns to the cake and the shades are suddenly drawn shut, she tries to chase down someone in the darkness, but again comes up empty. The cake appears unmolested, so she stands guard until she falls asleep.

The next morning she wakes up and is joined by Twilight. Pinkie is proud of her dilligence, but Twilight points out that the back of the cake is largely eaten. Pinkie is horrified and wants to find out "who did done dood it." Twilight says that she's read a lot of mystery novels and they'll need to investigate. Pinkie dons a deerstalker cap and a bubble pipe and dubs Twilight her lowly assistant. She then accuses each of the other bakers in turn of being the culprit, spinning wild tales of how they did it. Twilight points out that her theories don't square with the evidence or, indeed, reality. The train goes through a tunnel and when it emerges, all of the other bakers' entries have been partially eaten.

Twilight takes over the investigation, literally switching hats with Pinkie, and combs through the train retracing Pinkie's steps. She finds clues at the rear of the train, in the engineer's hat, and on the picture hanging in the entries' car. She then gathers everyone together and shows them (and us) what she found. At the rear of the train she found a blue feather, which implicates Rainbow Dash. In the engineer's cap she found a pink hair, which indicates Fluttershy. On the picture in the train car she found a false eyelash, which implicates Rarity (who has been wearing her hair over her eye.) The guilty ponies all confess, saying that Pinkie had made the cake sound so good they couldn't resist trying it.

Pinkie forgives them, saying she's satisfied that they at least solved the mystery. Twilight points out that they have only solved the mystery of the MMMM, and they don't know who ate the other entries. Pinkie decides to look for clues, and Twilight gives her the deerstalker. She combs through the car and declares the guilty party to be... the other bakers! Each had some evidence of another bakers' entry on their body. They all apologize to each other, and also cite Pinkie's irresitable descriptions of the entries as stoking their desire. Gustave points out that none of them have an entry for the contest now. Pinkie declares that she can fix that.

At the competition all of the bakers help bring in an entry as large as the MMMM was. It's revealed to be a bakers chimera, with componets from all of their entries. The impressed judges give it a blue ribbon as Pinkie dictates her letter to the Princess about the importance of getting all the facts before blaming someone. 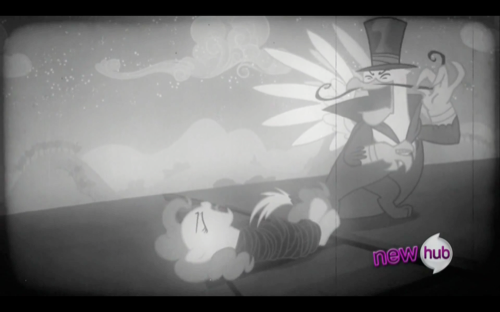 Review: Amy Keating Rogers seems to have a fondness for mules. In addition to this script she penned A Friend in Deed, as well as several mule-less favorites like Bridal Gossip.

Staging a mystery story was a nice change of pace. The solution to the mystery may have been obvious, especially if you made the connection between the title and Murder on the Orient Express, but they added enough misdirection to keep it interesting, even while leaving some clues in plain sight. Applejack was vindicated, despite being the first to try to taste the cake. Rarity's sudden hairstyle change made perfect sense if you noticed that the portrait Pinkie straightened had grown an eyelash. The bakers were cleared of eating the Cakes' cake, but were guilty of eating each others' confections.

The way Twilight gathered clues without us seeing what she's picking up is usually a big no-no in mysteries. Here it works because as viewers we were able to see the things that she didn't, and we had our own set of clues to pick up. The escape out the back of the train implied a pegasus. The silhouette that Pinkie saw in the engine was of a mare and her tail was rather distinctive. And of course those of us who were as sharp-eyed as Twi noticed the eyelash on the portrait ("those of us" does not include "I," I should note.)

Still, the underlying premise felt a bit off. It seems odd that three of the Mane Six (including the element of loyalty) would risk Pinkie's employers' entry into a national competition, even if they thought their part would go unnoticed. Particularly when they knew Pinkie was worried about just that. I sure hope the Cakes' are happy enough that they won first prize, even if they have to share it. If they're smart, they'll put Pinkie in charge of advertising.

The animators must have had a ball with this episode, unless they were tearing their hair out. We got three completely different genres for each of Pinkies speculations about the bakers. We went through a silent movie (for Gustave,) a Bond parody (for Donut Joe,) and an Anime (for Mulia Mild.) William Anderson did a great job with the backing music for all of them, and the rest of the episode, as well.

The voice actors on this show are among the best in the business, but Tabitha St. Germain does a particularly good job as Rarity. She barely had any lines, but stole the scene with her reading of Rarity's 'confession.' She completely falls apart while admitting she wears false eyelashes, and then instantly composes herself to add "Oh, and I took a bite of the cake."

We're still seeing some nice continuity touches, like Donut Joe. He last appeared in The Best Night Ever, at a diner in Canterlot. This time the other characters are surprised to find him in Ponyville, and he exposits that he had to pick up sprinkles for his donuts. This does make me wonder, though, if he gets his sprinkles from the Cakes. 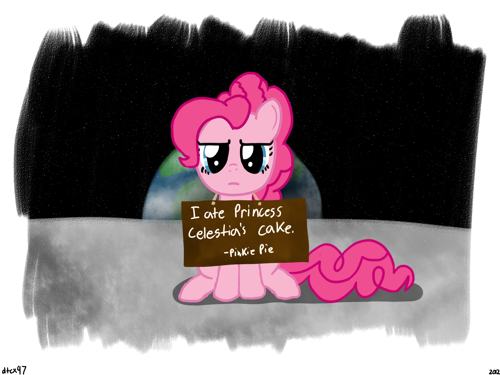 Brony Notes: No Derpy again this week, although her near doppleganger, fan-named "Cloud Kicker," shows up at the end.

Fan reaction was largely positive, but some did have the same reservations I did about the premise of the mystery. The artists did not run with the other genres as much as I would have thought, although it's not territory they haven't covered on their own. DeviantArtist dtcx97 took Pinkie's cake-devouring from this episode and Celestia's prediliction for cake shown last episode, and came to the above conclusion about Pinkie's current whereabouts.

Netflix recently added season one of FiM to their offerings, and it's taken the top slot for their TV programming.

Sabrina "Sibsy" Alberghetti is a senior storyboard artist on FiM. She was one of the first members of the creative team to reach out to the adult fandom, providing some glimpses behind the curtain. Below she's interviewed by Everfree Radio.

Tomorrow the two-part season finale airs. I'm curious to see if Tori Spelling is still "covering" it, since she was absent from last week's Royal Wedding party.