Twilight is visited by her future self, and the future isn't looking good. 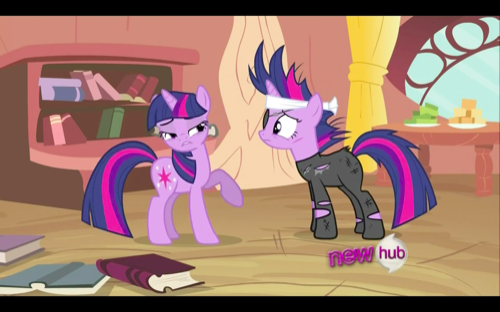 Recap: It's three in the morning and Spike is wakened from dreams of ice cream and Rarity by Twilight fretting over her schedule. She forgot to schedule time to make next month's schedule. As she sorts it out she's visited by her future self. Future Twilight is a haggard, scarred, one-eyed veteran of... next Tuesday? She's come to warn her past self, but Present Twilight peppers her with so many questions that Future Twilight is sucked back through time before she can complete her warning.

Alarmed, Twilight organizes Ponyville to disaster-proof the town. They secure any potential infrastructure hazards only to have the gigantic Cerberus appear in the middle of town. Twilight steels herself for battle, but Fluttershy deftly calms the oversized pup by rubbing his (their?) tummy. Borrowing a ball from Pinkie Pie to hold his attention, Twi sets off to lure Cerberus back to Tartarus.

When she returns, she gets an accidental paper cut from one of Spike's messages. The cut is in the same place as it was on Future Twilight, which convinces her that the true disaster was not averted. Fearing that the problem might be what she does rather than what she fails to do, Twilight decides to not do anything. Taking it the logical extreme, she resolves not to move a muscle until next Tuesday. Spike takes advantage of this by gorging on ice cream and later, with Rainbow Dash's prompting, tickling Twilight with a feather. When she's had enough Twilight magically tosses Spike against a wall, prompting a belch of fire that singes her mane and leaves her looking even more like Future Twilight. Growing increasingly anxious, she says she wishes she could see the future so she'll know how to stop it. Spike volunteers to take her to a pony that can help.

They visit "Madam Pinkie," who is Pinkie Pie in a fortune teller's outfit. Her predictions aren't helpful, and when Twilight asks her to use her Pinkie Sense to see into the future she's told it's only good for vague warnings of immediate events, like the flowerpot that just dropped on Twi's head.

Later, Pinkie pays a visit to Twilight. Her head is now bandaged (just like Future Twilight's) and she's trying to foresee disaster by monitoring everything. She's also sleep deprived, which is probably why she makes the mistake of asking Pinkie to calibrate her telescope. Pinkie has no idea what she's talking about, and Twilight ends up injuring herself by looking at the sun. Fortunately, Pinkie has eyepatches stashed throughout Ponyville.

With the feared day almost here, Twilight decides to sneak into the Starswirl the Bearded wing of the Canterlot Archives and find a spell to stop time! She brings Pinkie and Spike along and, clad in stealthy spy suits, they sneak into the Archive. It proves to be unnecessary, since the guard recognizes Twilight and unlocks the Starswirl wing for them. Despite frantic searching, they're unable to find a suitable spell and as dawn breaks... nothing happens. Pinkie then finds a spell that will let a person briefly travel through time, and Twilight decides to go tell her past self not to worry. Naturally, events play out exactly as before.

Back in the present, Spike's ice cream bender has finally caught up with him, and he realizes that "Future Spike's problem" is now his problem. 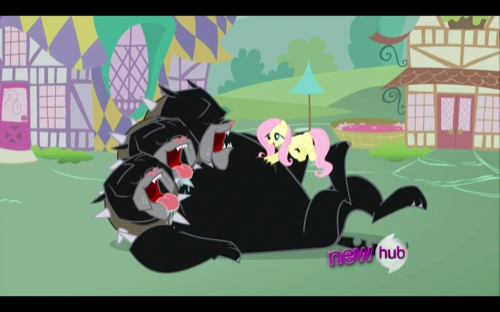 Review: Well, this was a Solid episode. Twilight's future self seems to have been inspired by the PlayStation game Metal Gear Solid (which itself drew on sources like Escape from New York.) We also got a bit of a lesson in Greek Mythology, with Tartarus being correctly mentioned as the realm of ancient evils. OK, yes, they did have it (un)guarded by Hades' watchdog, but close enough for a Saturday morning cartoon.

One thing that occurs to me often when watching Friendship is Magic is that while the show plays with common themes, it's also introducing them to the younger audience. Time travel is rife with these tropes, enough so that "future self has eye patch" is one in its own right, so it's nice to see it done well. While predictable, the loop Twilight experiences is nearly stable. The one paradox is that the location of the time travel spells appears to originate from within the loop, which is a minor complaint given the problematic history of this trope.

M.A. Larson was the writer here, and he appears to be the go-to guy for a solid FiM episode. He was also responsible for Super Speedy Cider Squeezy 6000, The Return of Harmony, and other fan favorites. This episode has a lot of his deft touches. Bringing the chaotic Pinkie in as a foil for Twilight works well, as does Spike's mirror-image version of Twilight's predicament.

The animation and music were top-notch, as usual, and even the sound design was well done. You can pick up some sound cues out of Metal Gear Solid in the Archive sequence. 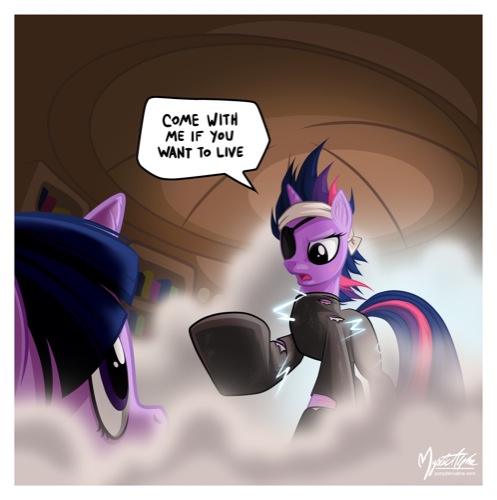 Brony Notes: No Derpy this time, but the David Tennant-esque pony dubbed "Doctor Whooves" is, appropriately, present for Twilight's appeal to the townsfolk.

Fan reaction was overwhelmingly positive. This episode was compared favorably to the similar Lesson Zero, and frequently cited as a good one for introducing people to the series.

Part of the scene where Twilight meets herself was leaked by the Hub a couple days early, so the artists got a head start on Future Twilight. DeviantArtist mysticalpha picked up on the Terminator influences, above, and many others ran in similar directions.

One of the earliest outlets for fan creativity was in remixing and mashing up episode footage with audio from movie trailers. There's a lot of them out there but my current favorite is the one below, which R2 brought to my attention, that crosses the ponies with the trailer for the upcoming moon Nazi invasion flick, Iron Sky.