Ponyville is responsible for the water cycle in Equestria this year, and Rainbow Dash needs everypony to do their part. 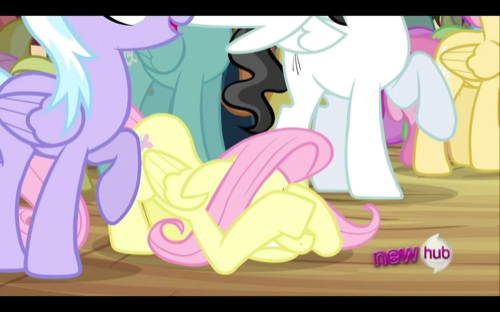 Recap: Rainbow Dash is rounding up the pegasi of Ponyville for an important meeting at the Library. When the meeting starts, she notices Fluttershy is absent but quickly discovers her hiding outside disguised as a tree.

The meeting begins with a fifties style educational film about the water cycle in Equestria. Pegasi create tornados to lift reservoirs of water up to Cloudsdale, which then creates rainclouds. Rainbow Dash tells the pegasi that Ponyville's reservoir has been selected. Moreover, she's convinced that they can beat the wing power record of 910 that Fillydelphia set last year. A new pony, Thunderlane, coughs and Dash warns that she'll have no malingering this year.

After checking on the pegasi training for the event, Dash goes to see why Fluttershy is conspicuously absent. Arriving at her cottage, Dash is confronted by a bespotted Fluttershy who claims to have the Pony Pox. Dash throws cold water on her story, literally, and the de-spotted Fluttershy claims to have hurt her wing. Dash startles her into flight, and then asks what's really going on. Fluttershy confesses that she can't fly. Dash points out that she flies just fine, and Fluttershy explains that she can in an emergency but tornado duty is more like a performance. She reminds Dash that she was often teased in flight camp. Dash resigns herself, but then Fluttershy decides to do it so as not to disappoint her friend.

At the training ground, Twilight has set up an anemometer to measure the pegasi's wing power. Thunderlane coughs again, so Dash has him go first. He scores a respectable 9.3, but Dash wants everypony to get up to 10.0 so they can break the record. Fluttershy hears a couple ponies laughing during her attempt, and consequently only scores 0.5. With her stage fright in full gallop, Fluttershy runs off.

Fluttershy's animals give her a pep talk, and she decides not to give up. After a training montage, she tries again and manages to score... a 2.3. Twilight points out that this is a huge improvement, but Fluttershy is humiliated and runs off again.

The big day arrives and Thunderlane is missing. It turns out that he had Feather Flu, and now he and eight other ponies are in the hospital. The record is out of reach, and now they are in danger of not being able to accomplish their goal at all. Fluttershy shows up to lend moral support, and finds that they fell just short of the 800 wing power that they need. Dash is determined and they make another attempt. They get within five wing power of minimum and Twilight convinces Fluttershy to help. When she joins the rest of the pegasi the waterspout succeeds. Back on the ground, everyone congratulates her and she composes a letter to Celestia stating that anypony can make a difference 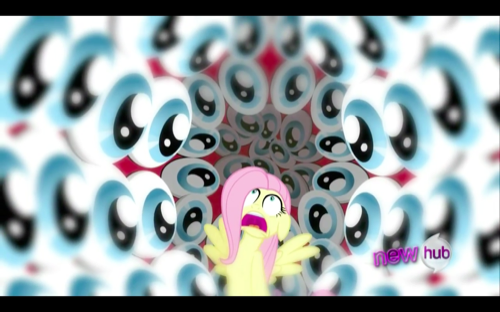 Review: This was a pretty good episode. Cindy Morrow is one of the more prolific FiM writers with a lot of fan favorites to her credit, including the recent Read It and Weep.

I wasn't looking forward to yet another "Fluttershy faces up to her fears" story. However, Fluttershy has a lot of fears and I liked that they looked at performance anxiety in particular. Tying in the flight camp bullying from The Cutie Mark Chronicles and the wing lock-up she displayed in Dragonshy were nice touches. I especially liked that they explained Fluttershy's inconsistant flying ability. "In an emergency" she's fast enough to catch up to Rainbow Dash while dragging a balloon.

This almost works better as a Rainbow Dash episode. We get to see that Dash is smart enough to drop her drill sergeant routine when it isn't getting her anywhere. She also displays some real empathy for her friend. We also get to see her nearly turn a record breaking attempt into complete failure because she's too obsessed with the record to realize that a pony might actually be sick.

The schizophrenic technology shows up again, but here it's done well. Twilight may be adding numbers from an anemometer on her abacus, but each is the minimum tool required for the job.

The animators did their usual great job, particularly with the background ponies, who got more variation than usual. Most noticable was the overly muscled but tiny winged pegasus that looks like an homage to Ren and Stimpy creator John Kricfalusi's style. Background musician William Anderson also brought his A game, especially with the Karate Kid style montage music for Fluttershy. 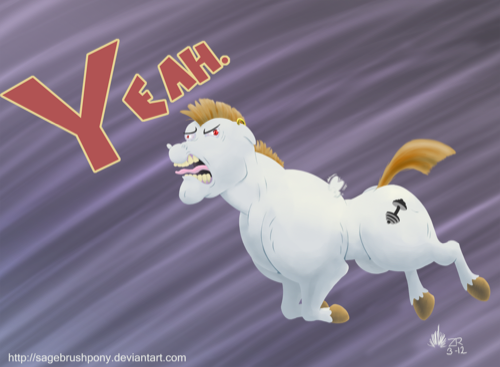 Brony Notes: Derpy was everywhere this episode, first appearing within seconds of the show's open.

Fan reaction to this episode was mostly positive, although some were disappointed that Fluttershy had to learn to face her fears again. Fluttershy in tree disguise was very well received, as artists had been running with the "Fluttertree" idea since it was first mentioned last season. The overly muscled pegasus, as interpreted above by deviantArtist SagebrushPony, was a big hit alghough fans are having trouble coming to a consensus on a name for him.

The eagerly awaited massively multiplayer online game Equestria Online had a big setback this week. Internal divisions prompted a huge number of developers to leave in favor of a similar project, Legends of Equestria.

There's a sizable number of physics students among the adult fans of the show, and they love to test events in it against the laws of physics. Below is an analysis of "wing power." Note that he basis some of this calculations on "apple units" which is a popular fan means of measuring within the FiM world under the assumption that apples are the same size there as they are here.