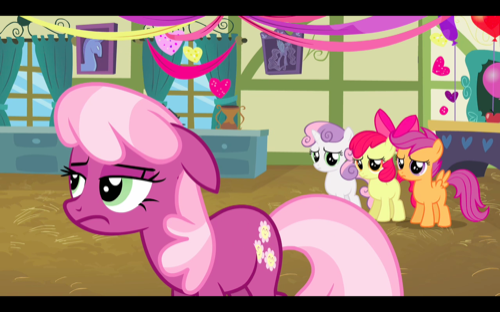 Recap: The Cutie Mark Crusaders make a Hearts and Hooves Day card for their favorite (only?) teacher, Cheerilee, that ends up being several times their own height. After presenting it to her at school, they're shocked to find that she doesn't have a 'very special somepony' to spend the day with. Sweetie Belle decides that they should fix that, to which the other Crusaders enthusiastically agree.

They (musically) search the town for a suitable stallion, finally settling on Big Macintosh. Applebloom points out that for all his good traits, he's very shy and isn't likely to ask her out. Sweetie Belle decides that if they can get the two of them in a romantic setting, she might ask him.

They set up a picnic in a gazebo outside of town and invite Cheerilee and Big Mac under pretexts. When they arrive, the Crusaders abscond to a nearby bush to observe. Cheerilee and Mac share an awkward moment and then continue on their way.

The Crusaders are bemoaning the results of their efforts when Twilight bumps into them, literally. Twi appologizes and explains that she was lost in a book about the origin of Hearts and Hooves Day. When she mentions that it was all the result of a love potion, which recipe is in the book, the trio perk up and ask to borrow the book. Back at their clubhouse, the Crusaders follow the recipe in the book to brew the potion.

In a repeat of their gazebo gambit, the Crusaders get Cheerilee and Big Mac to 'taste test' their new punch. They're delighted to find it actually works, until it works too well. Mac and Cherilee become besotted with each other, inventing strings of lovey-dovey appellations and generally behaving in a saccharine manner.

Back at their clubhouse, Sweetie Belle discovers that the actual story behind the love potion is an ominous one. A prince had given the potion to a princess he liked, but it turned out to be a love poison. Due to its effects they neglected their royal duties, eventually leading to the downfall of the kingdom. Applebloom is particularly horrified by the implications for her brother and their teacher, but Sweetie Belle learns there's an antidote. If they can keep them from looking into each others' eyes for one full hour, the spell will be broken.

They find the besotted couple at Sugarcube Corner. Sweetie hatches a plan to suggest that they get married, in the hope that they can drag the preparations out for more than an hour. She takes Cheerilee to her sister's boutique to pick out a dress and Applebloom and Scootaloo take Big Mac out to find a ring. Cheerilee ends up barricaded inside a fitting room, but Mac manages to get a ring with 25 minutes remaining. Scootaloo races ahead to warn Sweetie Belle, while Applebloom tries to slow her brother down.

Applebloom has limited success, since her brother is ridiculously strong. Her brother doesn't notice when she ties an ox cart full of anvils tied to him. Even roping him to a house barely slows him down (much to the alarm of the occupant.) Sweetie Belle and Scootaloo managed to dig a pitfall, which succeeds in containing him but Cheerilee hears him outside and breaks out of the boutique. She bowls over the Crusaders and dives into the pit... just after the spell has been broken. Unsure of what just happened, Cheerilee and Big Mac hear the explanation/apology from the trio. Cheerilee decides that doing Big Mac's chores would be a suitable punishment.

As the Crusaders are harvesting apples, Cheerilee arrives. When they ask what she's doing on the farm, she tells them that since Big Mac has some free time now, the two of them are going to have a picnic at the gazebo. The trio are alarmed when Cheerilee and Big Mac revert to their lovey-dovey talk, but a mutual wink assures us that they're having their fun with the Crusaders. 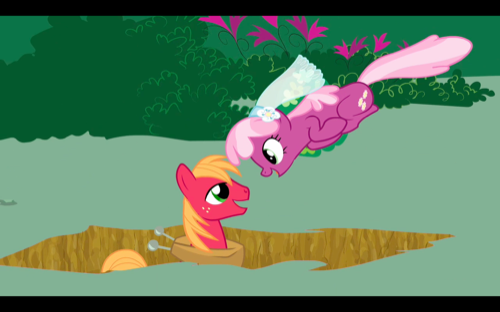 Review: I was wondering how they were going to pull this one off. Romantic episodes of non-romantic shows are tough to do, doubly so when its a kid's show. They did a good job here, with the real emphasis being on the importance of one's responsibilities, and not interfering with others' relationships (also, not doping people's drinks.)

There might have been a subtle bit of world-building worked into this episode. The story of the prince and princess from Twilight's book ends in "chaos reigning," which could be the origin of Dischord's rule. It'd be completely fitting with this world if that was the result of (arguably) good intentions gone awry.

It was nice to see an actual Cutie Mark Crusaders episode, although they seem to have let go of any actual Crusading (they weren't actively trying for a cutie mark, which is just as well.) Big Macintosh got more lines in this one episode than he's had in the rest of the show put together. Cheerilee got a bit of a star turn as well. Her occasional dropping of the bright, encouraging persona she usually presents to the foals was a welcome bit of development. If she was a major character I'd bet bits on her having a meltdown episode of her own.

The animation continues to be fantastic. Cheerilee's expressions alone are worth a rewatch, as are the (suitably) more subtle ones on Big Mac. I approve of the continued use of visual gags, such as the fainting couch and kitchen sink that Rarity always seems to have lying around. The latter is a simple visual pun that just keeps getting funnier the more it's used, especially in Rarity's (implied) presence. (If someone hasn't already written a fanfic explaining Rarity's sink, I'll eat a giant hat.) 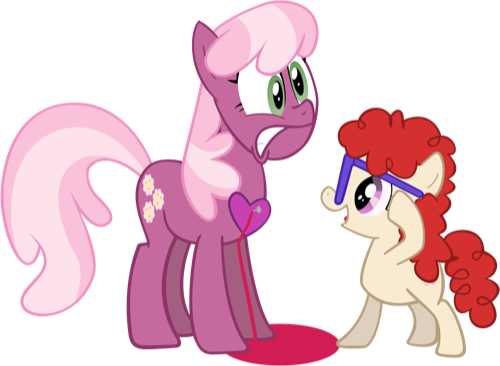 Brony Notes: Derpy appeared a couple times in the extremely wide shots of Ponyville. Once in the company of Doctor Whooves, which is a common fan pairing, and once with a young foal, which had everyone scratching their heads.

This episode went over well, Cheerilee and Big Macintosh being popular secondary characters. The former is something of a success story, since she was introduced as a McDonald's Happy Meal toy before she appeared on the show. Fans were annoyed that a nobody took a place that could have featured a more popular character. (There's a similar situation going on with the next batch of Happy Meal toys, but now the fans are eager to see the new pony show up.)

Someone at iTunes derped and they released this episode on Wednesday night. That caused much anxiety in the fandom, as people tried to keep from spoiling the episode for the minority who wanted to watch it when it actually aired.

Despite getting an early start, the artists and musicians haven't really run with this one. There wasn't a lot of new visuals, deviantArtist Ambits mined a background joke for the above. And while we did get a new song it doesn't seem to have lent itself to remixing. The songs can take a while, though, so we may see some in the future.

The real buzz this weekend was the release of information about upcoming toys. A new set of Happy Meal toys debuts next week. These are popular because they're the most show-accurate figures available. However, the real news was that Hasbro is releasing what amounts to a 'brony set' of their main line of toys. It will include DJ PON-3, a glow-in-the-dark Zecora, Nightmare Moon, and a white Celestia (the toy version has been pink.) This is seen as a vote of confidence in the adult fan base. Equestria Daily has a roundup, and the below image was posted to the MLP Facebook page.