It's that time of year, and the Mane Six are putting on the traditional pageant for the holidays. 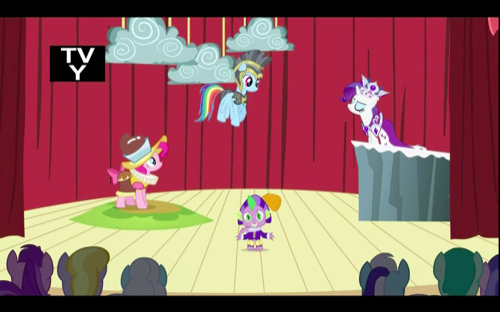 Recap: That train from the new credits finally makes its appearance, carrying the Mane Six up to Canterlot. Rarity is wearing an uncharacteristically tacky hat that alerts us that this is the holiday episode. As the characters walk through town, (mis)playing "I Spy," we learn it's "Hearth's Warming Eve."

After the titles, we find the ponies are getting ready to put on a play for Canterlot. Fluttershy is suffering from stage fright, Rarity is "helping" her, and Applejack and Rainbow Dash are bickering. A window blows open, but they're all too busy arguing to close it.

The play starts, and Spike narrates the pre-history of Equestria. The Mane Six act out the parts of their ancestors, with Rarity, Rainbow Dash, and Pinkie Pie playing the leaders of the unicorns, pegasi, and earth ponies (the non-flying, non-magical ponies.) Twilight, Fluttershy, and Applejack portray their underlings.

We learn that before Equestria was founded the ponies were divided into racial tribes. The snobby unicorns and belligerent pegasi demanded food as tribute from the lowly earth ponies. One day a mysterious blizzard swept into the land and destroyed the harvest. Bickering increased as the earth ponies started hoarding the food, and the pegasi and unicorns blamed each other for failing to stop, or possibly causing, the bizzard. A summit was called between the tribes, but the leaders failed to resolve anything. As they depart, we are shown strange ghostly pony-like creatures in the blizzard's clouds.

All three leaders decide that the only thing to do is find a new land. They strike out and, after humorous episodes, each finds a suitable place. The pegasi proclaim their new territory Pegasopolis, the unicorns found Unicornia, and the earth ponies found Dirtville but quickly discard the name in favor of Earth. Naturally, they've all claimed the same land and fighting breaks out immediately, quickly followed by the blizzard.

The ponies are forced to seek shelter, and they all hole up in a large cave. They quickly begin bicker over the cave, drawing boundaries and claiming rocks. As they clash, the cave ices over. First, the entrance is sealed and then the leaders are frozen in place. The followers band together as the strange ghostly creatures appear in the cave itself. Clover the Clever (Twilight) deduces that they must be Windigos, malicious beings that feed on hate. As they're trapped by the ice in the center of the cave, the three become friends and just before they're iced over completely Clover goes into possessed mode and blasts the creatures away with the Fire of Friendship. The other ponies are surprised, and Clover says that the power came from all of them. The leaders are eventually thawed and they all agree to share the new land, now dubbed Equestria. The Mane Six take a bow, and then lead the audience in a Hearth's Warming carol.

Backstage, the open window still hasn't been shut. They start to argue about who should do it, but after a Windigo-ish howl is heard Dash just takes care of it. 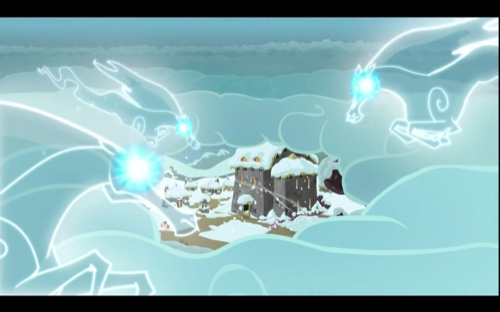 Review: This episode was... nice.

It's Meriweather Williams' second writing credit on the show, and I think she's got the Mane Six's personalities down better than she did in The Mysterious Mare Do Well. Technically they're usually acting as another character, but the casting joke is that they're perfect for their parts.

The Hearth's Warming Eve pageant was well done. It was a decent story and amusingly depicted. One nice bonus was the introduction of Wendigos, which are obscure even for the geeky secondary audience. They are from Algonquin mythology, and are malevolent entities associated with cold, famine, and canibalism. They're quite reminiscent of the Others from G.R.R. Martin's A Song of Ice and Fire series. Judging from their depiction here, I suspect the canon spelling is the "Windigo" variant.

The pageant was a bit frustrating as backstory. On the one hand, we get some more of the history of Equestria, although it largely confirmed what was told in the Twilight Sparkle: Teacher for a Day iOS app (which was likely based on the story for this episode.) On the other hand, we get no information on the princesses, except for one curious tidbit that the unicorns were originally responsible for raising the sun and moon, which raises the possibility that the princesses did not yet exist. We know that they didn't rule Equestria until they ousted Discord, but this is the first we've heard that they weren't doing their celestial (sorry) duties before that. Strangely, in Luna Eclipsed, Luna implies that she knew Starswirl the Bearded, who is mentioned as a mentor to Twilight's character. Also, the flag used appears to depict the princesses. So, ultimately we've more questions than answers.

The song was... meh. It worked fine in story and was dutifully carol-ish, but I doubt we're going to see anywhere near the number of remixes as Becoming Popular has. In fact, I'd have to say it's my least favorite Friendship is Magic song yet.

So, overall a solid episode, but not an inspired one. It might be one of those that I consider skipping on rewatches. 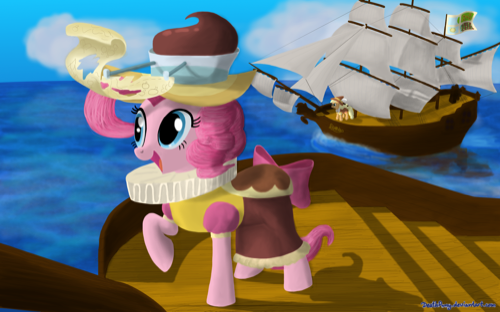 Brony Notes: Derpy shows up front and center, peeking out from behind the stage curtains (and getting sent to the wings for doing it) right after the titles (at about the 1:50 mark.)

Fan response has been basically positive. The artists are having fun with the 'historical' costumes, such as deviantArtist DeathPwny's take on Chancellor Puddinghead/Pinkie Pie above. Not everyone was as down on the song as I was. YouTuber just4lolzz arranged it for strings, which you can hear below.

Speaking of music, show composer Daniel Ingram is submitting some of his songs for Emmy consideration, and he's asking fans for help in writing the informational essay. You can find details at Equestria Daily

Also worth noting, Reddit's MLP section /r/mylittlepony turned a year old this week, which makes it one of the oldest brony communities outside of 4chan. Fans are also banding together to pool funds for the Humble Indie Bundle (which is half game sale and half charitable fundraising) and are currently sitting at the top of the leaderboard.

MLP will be on a short hiatus over the holidays, returning January 7th. The next episode will focus on Apple Bloom and Granny Smith, so it should be fun. I'll probably throw up some posts during the gap. I'm guessing most fans will be off from school and have time to come up with some interesting things.