Spike sets off to find his roots by joining the Great Dragon Migration. 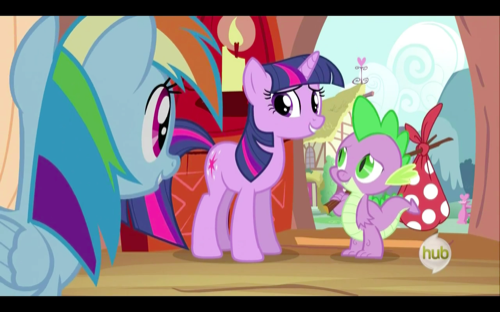 Recap: Twilight and Rainbow Dash are trying to get Fluttershy to join them in observing the once-in-a-generation Great Dragon Migration. The normally timid pony adamantly refuses, and bowls Dash over before running off.

Later, the camouflaged ponies are observing the dragons from a trench while Spike serves tea. Rainbow Dash teases Spike about not being fierce like the other dragons. Rarity's embarassing 'defense' of him causes him to storm off.

That night, Spike lies awake wondering about where he came from. Twilight tries to comfort him by looking up any information she has about dragons, only to find that ponies don't know much about them at all. Spike decides that the only way to find out is to join the dragon migration himself. Dash tries to physically stop him, but Twilight says that he should be allowed to go on his quest (while assuring Rarity that they'll follow him.)

After travelling over hill and dale, Spike arrives at a volcano covered in dragons. Rarity, Dash, and Twilight, wearing a large dragon costume, are not far behind. Spike finds a group of teenaged dragons, who initially make fun of him but then give him a series of tests to prove his dragonhood. He fails all but a tail-wresting match with the girls in the dragon costume. However, his final failure, belly flopping into a lava pool during the cannonball competition, sufficiently impresses the teens that they dub him a rookie dragon.

After a dragon-style party, which seems to consist largely of eating copious amounts of gems, Spike declares that he'd be content to stay with the dragons forever, which alarms the girls. The other dragons decide to raid a phoenix nest for the eggs and task Spike with luring the parents away, which he does. When they raid the nest they find that the eggs have hatched and decide to grab the hatchlings instead. The tiny phoenixes prove elusive and the parents return to them, eventually ditching the dragons by blinding them with their light before flying off. Spike returns to the nest and finds an egg that had fallen out. The other dragons return and are impressed, but they then demand that he smash it. Spike refuses, and they turn on him. The girls ditch their costume and stand with him, which only elicits laughter from the dragons. Spike and the ponies turn and run and Twilight manages to teleport the group away in the nick of time.

Back at Twi's house, Spike pens a letter to Celestia, declaring that "who I am is not the same as what I am." The phoenix egg hatches, and Spike welcomes "Peewee" to the family and promises to teach him about being a pony. 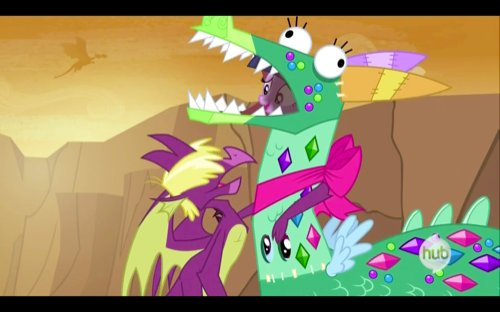 Review: This was a fairly good episode. It's interesting that, although it was a Spike episode, they managed to keep half of the girls around as a greek chorus. The combination of Dash's teasing and Rarity's 'praise' prompted Spike to question himself in the first place, so I like that they came along to keep an eye on him.

The basic message of the episode struck me as a bit muddled. Spike set out to find out what it means to be a dragon, and found out that teenaged dragons are jerks. He still knows very little else about dragons afterwards. Is he going to develop wings, like every other dragon on the show? Is he really a dragon after all?

Still, the actual lesson about not letting others define you is a good one. There's also a strong secondary message about not giving into peer pressure. This is writ large when he defies the other dragons, but it shows up early when he defends his wearing an apron (blueberry stains are even worse in Equestria, it seems.)

Merriweather Williams wrote this one, and she can be uneven in her handling of the FiM world. The phoenixes were also a curious choice. We've already seen Celestia's pull the self-regeneration fire trick, so it's odd that they also have eggs. It's probably odder that they have them in nests in trees. The bottom of the nest did look like it had been blackened, so fire might still be involved somehow. It'll be interesting to see if Peewee shows up again, or if he's forgotten like Tank.

There's lots of little touches that the writers and animators threw in. It's nice to see that Fluttershy's assertiveness training has stuck with her. Cranky Doodle's appearance with his old wig suggests that this episode takes place before A Friend in Deed. Twilight's brief collapse after teleporting the four of them was a very effective way of wordlessly communicating that it was hard. A rather subtle joke was that Rarity's garish "camouflage" actually worked better in the technicolor field the ponies were hiding in.

The score was also well done, as usual, which is fortunate since it had to carry the entire "Spike travelling" sequence. The use of electric guitars when the teens were messing with Spike was also a nice touch. 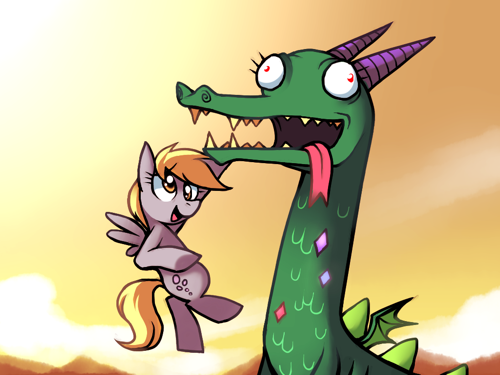 Brony Notes: No Derpy this week. We did get the dragons from Dragonshy and Owl's Well That Ends Well, though.

Fan reaction was cooly positive. It was widely regarded as a good episode, but not a great one. It was generally acknowledged as one of Merriweather Williams better efforts, though. Some fans are disturbed that every dragon we've seen is a jerk, which seems to run counter to the show's spirit. (I maintain that the dragon in Dragonshy wasn't actually a jerk.)

Perhaps predictably, the artists took a shine to Crackle, the improbable look-alike to the girls' dragon disguise. Since we're Derpy-less this week, have deviantArtist Karzahnii's take on him above, along with GiantMosquito's very seasonal Lyra below. 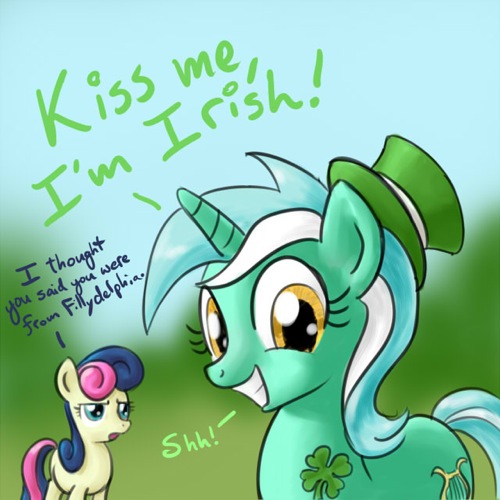